I didn't have very good night's sleep on Sunday, as I was EXCITED about the next morning's trip to DERBY also WORRIED in case I slept through my alarm. I thus lay abed AGES too soon, wide awake, waiting for it to be time to get up and GO. It was going to be a BIG DAY!

I made my train OK - despite DELAYS VARIOUS on the underground - and SPED Northwards, diligently doing a bit of PREP on the way, listening to previous mixes and checking through my notes to see what needed doing and what I might have missed. The carriage was full of BUSINESSMEN doing the similar. Why, I must have appeared to them to be one of their own, little did they know I was plotting ROCK HISTORY!

Rich met me at the studio and we got pretty much STRAIGHT down to business, very speedily doing the final SONG mix, for A Little Bit More, which we hadn't had time for when me and Tom were in a few weeks ago. We then got started on the dialogue sections - I thought this would be PEASY, but it took AGES. The trouble with doing FOLEY is that, once you get in to it, you find loads of OTHER stuff you need to put in. For instance, we were editing a dialogue track called "A Moment Of History" which features Giant Robots fighting Dinosaurs as people run screaming then ZOOMS down to the inside of Grandad's house where they're listening to the radio. They turn this off and run outside, straight into a Space Dinosaur. Now, you might think the battle sounds, roars, explosions and whatnot would be the hard part, but those were OBVIOUS and done AGES ago. Having listened to the last batch of mixes I'd realised that we needed to hear people running down the corridor to GET to the front door... and when we'd done that we suddenly saw that we needed to change the relative volumes of Terry and Grandad as they called to each other across the front drive... and that we'd ALSO need to hear them running on gravel ACROSS the drive and... well, you get the idea. Plastering EXPLOSIONS over EVERYTHING was lots of fun, but the IMPORTANT stuff is tons of TINY bits that I doubt anyone will ever notice, but make it all sound suddenly a LOT more real. Which is pretty important when everything else is full of SPACE DINOSAURS!

We had a break for lunch before plugging on for another couple of hourse, finishing with one final bit of sound effects recording, simulating the sound of a pair of BINOCULARS being handed over using a WATER BOTTLE. Again, this was in the middle of a parade with a brass band, fleeing crowds, roaring dinosaurs and the destruction of a planetoid, but it had to be RIGHT to make it all work properly!

After that the PRESSURE suddenly RATCHETED UP as it was time to do the SEGUES. The day before at home The Landlady had demonstrated BREATHING EXERCISES and GOODNESS ME i needed them, as it became clear to my SUBCONSCIOUS that THIS WAS (nearly) IT! These segues were probably going to be the (nearly) FINAL ACT in over TWO YEARS of WORK, creating something which would hopefully last for DECADES!! "Hibbett!" I said to myself, "Don't panic! You've got a final final FINAL mixing session in September to tidy up any errors, it doesn't have to be PERFECT!" but it didn't really help. I found myself SCREECHING in HORROR when one track was A Bit Louder Than Its Predecessor and had to apologise to Rich for getting KRAZY!

Eventually it was done, and all that was left was to BURN the CD - I could scarce believe it when it was DONE, so took the following picture for the purposes of HISTORY: 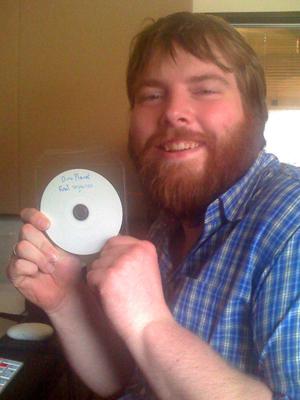 There were congratulations, a MANLY HUG, and then I headed round the corner to meet The Family Machine for a much needed PINT and also some BABY GRAPPLING. Frankie gave me a lift to the station and soon I was back on the train. It turns out that going Advance First Class (oh yes!) on a WEEK DAY EVENING is different from my usual weekend or morning trips in that you get FREE BOOZE. This, added to the general excitement, put me in a somewhat HEIGHTENED STATE to be reading Grant Morrison's AMAZING "Supergods" book. At one point, reading about some of his EXPERIENCES, I suddenly found that i ALSO could see the cup in front of me in FIVE DIMENSIONS. It was a bit RUM, also rather BRILLIANT - I'd recommend a read of it to anyone interested in not just comics but also CREATIVITY and ESPECIALLY if you have even a passing interest in AMAZING IDEAS and SUDDEN HILARIOUS REALISATIONS. Several parts of the book keep leaping back out at me to go "HA! Remember THIS Incredible Insight?"

It was a fantastic mind expanding part of a fantastic mind expanding day, which came to a close later on that evening with me listening, incredulously, to the entire finished album on my MyPod. I'd been AFEARED that I'd get home and find LOADS of mistakes and things that needed fixing, but NO! There's a few places where the relative volumes need fixing, but otherwise: COR! We appear to have created something AMAZING!!