One of the most FUN aspects of doing shows like what we do is doing the POSTER - I enjoy nothing more than messing around with font sizes and rotating images for hours on end, it is exceedingly therapeutic. Previously we've had pictures of me and Steve (or just me for the earlier shows), but as Total Hero Team is about SUPERHEROES and is structured around COMICS I thought it would be good to have some Proper Comics ART for the poster.

My thoughts turned first of all to the ever marvellous Mr John Allison, who did so much wonderful work on Dinosaur Planet. Steve agreed and, to our GRATE joy, so did Mr Allison, and I'm very VERY pleased to be able to present the fruits of his labours, THUS: 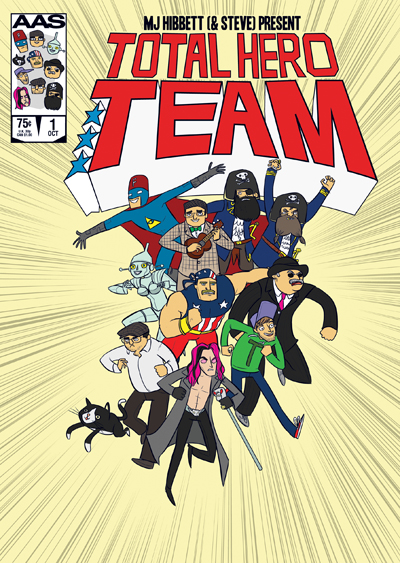 GORGEOUS, isn't it? If you want it bigger (MUCH bigger), give it a click! As you can probably tell, the idea is that we fill the spaces round the edges with FACT for posters, and the general design and look also informs the brand new Total Hero Team WEBSITE which is LIVE as of RIGHT NOW. I say "brand new" but it's clearly based on the websites of the other shows, and doesn't have an awful lot of stuff on it just yet, but rest assured it certainly WILL as time goes by.

What's even more astounding about the ART is the way it was done - me and Steve took pictures of ourselves wearing the HATS from the show, and sent it to John (along with very brief character sketches) asking him to imagine that these were pictures of very low quality COSPLAY (i.e. people trying to dress up LIKE the superheroes), so that he could then REVERSE ENGINEER what these characters REALLY looked like. As you can see, he did this AMAZINGLY, and managed to capture the whole HEART of the show without ever seeing it or knowing what the story was.

Actually, those pictures and the character sketches might be a good thing to put on the webpage at some point, wouldn't they? I shall SCHEDULE that!

We'll be using the poster and the logo on pretty much EVERYTHING over the course of the next year, and I especially look forward to handing the FLYERS of it out to awestruck PUNTERS - or, to be honest, watching Steve do this while I sit in a nearby pub. The only worry, really, is that the SHOW now has a heck of a lot of work to do to live up to the posters!