It feels like FOREVER since I was last at home, but the Edinburgh Fringe just keeps on going. Over the past few days I have done the following things:

On Sunday I walked out of a YURT after 20 minutes of a show I wasn't enjoying. It's difficult to leave a Yurt surreptitiouslly at the best of times, but even more so when you have a large bag, a guitar, and a sparkly pink Hula Hoop. Our show was lovely, and then I dashed down the road to take part in Stand Up Tragedy. I did my best to fit the bill by, basically, during my usual intros to songs and fitting the word "tragedy" in whenever I could - I think it went OK but you can judge for yourself by listening to the podcast, THUS:

After that I collected The Ends Of My Bookends from another show and we went off to meet The Parents for A Tribute To The Music Of Simon & Garfunkel. This was NOT, as the chaps involved made abundantly clear, a tribute act with wigs etc, but rather two blokes doing EXTEMELY lovely versions of Simon & Garfunkel songs. After a day of dashing about in a very very busy Edinburgh it was just what the ROCK doctor ordered.

Next day we went to have a look at The Scottish Parliament - The Parents had been the day before and reported that it was GRATE, and they were right. It's no wonder all those SNP MPs have been rebelling against the strictures of Westminster, the Scottish version is MUCH better. It almost looks like a place people might debate and CHANGE things efficiently. They've got computers and EVERYTHING!

Suitably inspired we went for a walk up Arthur's Seat and, as ever, MARVELLED at the fact that Edinburgh has a RUDDY GREAT MOUNTAIN in the middle of it!

After celebrating this fact at Hendersons "Fringe Pop-Up" veggie cafe (LOVELY) we went home then I headed out again to do our show. It was a GRATE crowd, and Steve noticed that quite a few people had LANYARDS on and some had even been before. We agreed that this DEFINITELY meant that we were TOTALLY being judged for the PERRIER award. It's the only possible explanation!

I rounded off a DELIGHTFUL day by meeting The Hits In My Canon at the Cafe Royal, from whence we went to The Voodoo Rooms to REVEL in the GLORY of Mr John Otway. There were NEW BITS of the set - AMAZING SCENES! We recovered back in Cafe Royal with my delightful nephew Felix and also The Hewitts. Towards the end of the evening I felt QUITE SQUIDDLY, I can only assume it was the MOUNTAIN AIR going to my head!

On Tuesday my SISTER was in town along with my brother-in-law and FOUR entire NEPHEWS. The Members Of My Clan and I had a LOVELY meet-up with them before we had to head off to put the aforesaid Seats In My Carriage on a TRAIN, for LO! her time in Edinburgh had drawn to a close.

As she sped South I stomped back to the flat through mizzling rain that pretty much matched my mood i.e. a bit GLUM, but then I realised that this meant that I too would soon be heading home. I got back to the flat, picked up my bags, and headed straight out again to do the show.

We have PRIDED ourselves on always having double figures for our audience, and this time we continued that tradition... sort of. Here's a picture of our entire audience: 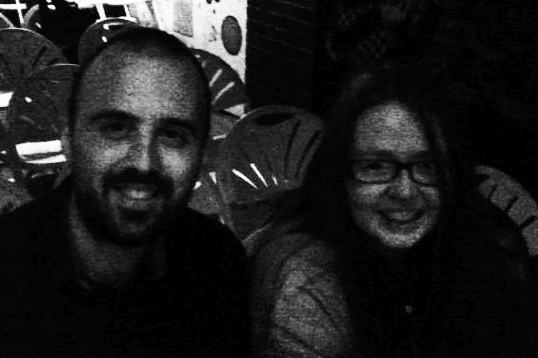 This is Jack and Leia! They didn't know each other before they turned up, but we all become PALS by the end of a (i thought rather good) show - they even sat together to share the lyrics sheet! It could have been a bit miserable but they were a GRATE audience and made it a DELIGHT to perform. HOORAH!

My next appointment was down the road at Canon's Gait, where I was taking part in "Chris Coltrane Tries To Learn How To Pronounce The Word Squirrel." I'm not QUITE sure even now what was going on, but basically I ended up HULA HOOPING for 60 seconds and then, apparently, breaking all the rules of the show by saying "Squirrel" out loud and pronouncing it correctly. At the end Mark Thomas came on, said hello, then left the stage - it was that sort of evening!

Still saddened by my solo status I popped into M&S for some COMFORT FOOD, then came home to do MORE WORK - including writing a JINGLE about the Olympics for London Calling, catching up on some ADMIN, and doing a laundry load. The glamour of Fringe life, it never ends!