While I was on my travels last week I took my TABLET and a LAPTOP with me, so that I could get on with some research for my PhD. For the past few months most of this research has been ACADEMIC, reading text books and theoretical analyses, which has meant that I've got a bit behind with the ACTUAL COMICS that I'm reading for Marvel Age Doom. This is my ongoing BLOG detailing EVERY appearance of Doctor Doom in ALL media between 1961 and 1987, which I'm using to record my THORTS and THEORIES as I go along. I'd been trying to get well ahead of myself with this, to the extent that, after Easter, I had TWO MONTHS of blogs drafted and ready to be unleashed. However, all the other work I've had to do meant that things had got PRECARIOUS, with only ONE blog in reserve. Something had to be done!

THUS I spent a lot of my train-time reading and writing about the amazing range of comics that came out around 1966-1968 that featured Doctor Doom. I discovered that, contrary to the opinion I had developed aged 10, I actually DO like the way that Gene Colan draws superheroes (and, especially, CARS). I also found that everybody who goes ON and ON about how FAR OUT and BRILLIANT Jim Steranko's on 'Nick Fury' is was ENTIRELY correct!

I also found out that there were a LOAD of comics published during this period that DID feature Doctor Doom but were NOT in my database. One of the comics I was looking at was 'Not Brand Echh' #7, halfway through a 13 issue series in which Stan Lee, Jack Kirby, and various other Marvel creators of the time produced parodies of their own and other companies' stories. It's very VERY much in the Mad tradition, with panels PACKED with tiny extra gags and celebrity cameos. According to my database Doctor Doom only appears in that one issue, but the more I read through the issue the odder it seemed. If Marvel were throwing EVERYBODY into EVERY panel, surely Doom, their biggest VILLAIN character, must appear more than once in the series?

I went to Marvel Unlimited (the subscription system which features approx 90% of ALL Marvel Comics EVER) to check, and immediately saw that my suspicions were correct. He's right there on the cover of the first issue, for instance! 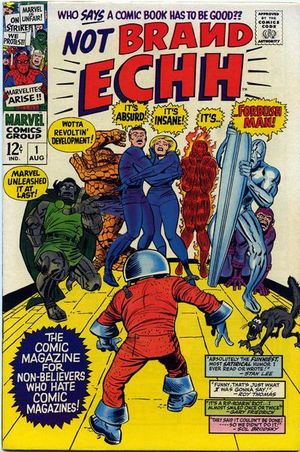 I thus had to download the entire series and read through THE LOT. I say "read" but it was more of a "flick through" at this stage, as those stories do not exactly age well. If you LIKE the 'Mad' style of humour they might be quite funny, but even in that case I think the enforced, relentless, Not That Funny GAGGAGE would start to grate after a while, and not in a good way!

I found about SEVEN extra issues that had Doom in them, which was BRILLO for my research, but also a bit annoying as I'd already written blogs WELL past the point when the first of them appeared. I'm trying to do it all in chronological order so I can assess the development of the character, but this meant I'd have to BACKTRACK a bit to cover the ones I'd missed. It also meant reorganising the timing of the other blogs that I'd written during the week of train travel AND add the basic information into the database. It took BLOODY AGES!

Still, it's all in there now and the blogs have already begun - this week over on Marvel Age Doom it is very much 'Not Brand Echh' week, as we cover these missing comics. Hopefully it'll be of some interest to those of you that are NOT writing an academic thesis of Doctor Doom, and it's all leading up to some DEAD GOOD comics next week where the aforesaid Gene Colan has a go at drawing him!