On Sunday The Picture In My Frame and I embarked on our Big Annual ART DAY, where we go into London Town and look at a load of ART. We don't JUST do this once a year of course - we are dead sophisticated - but this is the day when we always go to two or more SPECIFIC Art Events in the same day.

The first of these was The Serpentine Pavilion at The Serpentine Gallery, what we go to every year. This time we took a rather circuitous four-stage route of trains and tubes to get there which took a while but allowed us to almost entirely miss out the stinky Central Line, and then walked through the park to the gallery via a LOT of parrots. It's always good to go and see the pavilion because it is not only a Unique and Interesting Installation, but it is also one guaranteed to have BEER on sale within it, and so we sat on a bench with a drink admiring this year's presentation, which is basically as SLATE ROOF without a building beneath it. It was DEAD GOOD.

We then went into the gallery to look at the Faith Ringgold exhibition, which was quite good but didn't move me as much as I wanted to. It was quite similar to the Victoria Crowe exhibition in this and one other way - I think I preferred the earlier stuff. You can put the indie kid in an art gallery, but you can't stop him being indie!

We then HIKED across London for about 50 minutes until we reached Trafalgar Square, where we we nipped into The National Portrait Gallery for a well deserved sandwich and another BEER. We were also there to make our usual visit to see the BP Portrait Awards, which has varied a LOT over time, with some years (like last year) being DEAD GOOD and others being a bit bland/disappointing/GLOOMY. This year's fell quite neatly into the bland category, with an awful lot of those pictures where you have to look in REALLY close to see it's a painting rather than a photograph. It's all very clever, but I don't see the point, especially when it's a perfect replica of a not very good photograph. Why not just put a frame around the photo? Having said that, The Eye Of My Beholder did like Eden (Protection) which looked AMAZING. I think I may also have been put off by the caption to Ninety Years which said that the subject's "facial expression and hands serve as a metaphor for her life." NO THEY DON'T. Faces and hands can be reflections, or expressions, or even the RESULT of a life, but they are not flipping metaphors!

There was to be MUCH more of this sort of stuff - "Art Bollocks" as we in the trade call it, don't you know - when we got to our final stop, but happily it was more than made up for by some BRILLIANT exhibits. For LO! we got on the tube again and headed to Regents Park for the Frieze Sculpture park, which was BLOODY GRATE. Our favourites included a replica of a toy car scaled up to actual car-size, some GIGANTIC numbers and, my favourite, "Superhero Cog Woman #1" by LR Vandy. 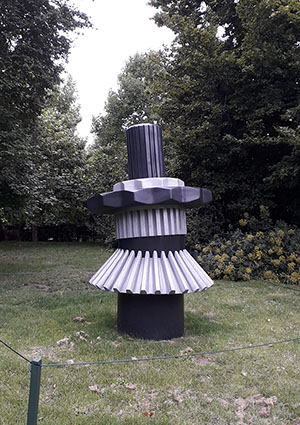 There were LOADS of GRATE sculptures which were being enjoyed by some very happy people out for a stroll around them. There was also some NONSENSE, including a sculpture that was described as circular "like the sun, the moon, the earth, the eye, the mother's breast, or the galaxy." I am PRETTY SURE that those last two are not actual circles, chaps.

Despite that it was a BRILLIANT way to end a THOROUGHLY enjoyable day wandering around drinking beer and looking at THE ART. I would highly recommend it, and can't wait for next year!