Who wrote the show?
Dinosaur Planet was written by MJ Hibbett. It was originally performed by him and Steve Hewitt, and recorded with The Validators.

Who designed the artwork?
All of our artwork was created by John Allison, author of the online comic strip Bad Machinery.

How many parts are there?
There are 20 named parts in the show - seven male and five female, with the rest interchangeable - and scope for as many extras as you like.

How long it it?
The two-man version of the show generally lasted about an hour, although this was usually performed at quite a pelt. We estimate that the full-cast version will take about 70 minutes, or longer if you're having fun with the battle scenes.

Why is it free?
We're offering the play to amateur productions in 2013 for three reasons - firstly, because we'd like more people to find out about the show, secondly to get feedback about how it works as a play, and finally so that we can demonstrate to theatrical publishers that it has been successfully performed, in the hope that they will take it onto their books for future performances.

Is it suitable for children?
Yes. The live adaptation features no swearing and only the mildest of peril.

Does it have any educational value?
Very much so. The core message of the play is that the world can only be saved by teamwork and good academic research methods. It also encourages the questioning of accepted ideas and contains an awful lot of information about iridium.

Can you provide workshops?
Yes. Funsense Theatre can provide Dinosaur Planet themed school workshops suitable for a range of ages. Please email us at info@dinosaurplanet.co.uk or contact them direct for further details of prices and availability.

Dinosaurs and Giant Robots? How can we make those?
There are many ways to represent the more unusual characters on stage. In the two-man touring show we wore Dinosaur masks and cardboard heads but you could use figures held up on sticks, groups of children acting together, silhouettes or even puppets. Part of the reason for offering the show to groups for free is to see what people will come up with! 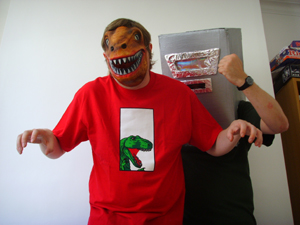 Does it need a big band?
It's entirely up to you. The original two-man show was performed with a single guitar, whilst the concept album has a huge array of instruments including a choir and half an orchestra! All of the songs are very easy to play with basic guitar chords - to see for yourself download a copy of the songbook, Let's All Play The Dinosaur Way.