The title for this issue isn't shown on the front cover, possibly because it's so dull. "Middle Game"? I know it's a reference to chess (which sort of appears in the story) and the fact that this is part two of a three part story, but come on Roy Thomas, even going with "Doom's Day" for the 219th time would have been better!

Doom exhibits several of his usual signifiers in this issue, notably his preference for keeping out of the main action by sending in robots to do his work and/or watching things on a TV screen. There's also some of the above mentioned chess, although it's not chess as you and I might know it. Here Roy Thomas and Rich Buckler hark back to Jim Steranko's Strange Tales #167 where Doom played a game of "chess" with The Prime Mover, moving figurines of the main players across a board to (somehow) express their actions in real-life. 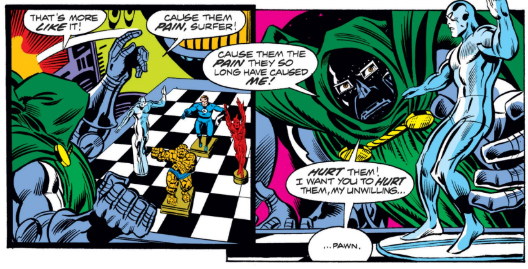 It was never clear how that worked before, and it's not explained here - indeed, Doom himself suddenly realises that the Silver Surfer figure he holds in his hand is a "pawn", "as all men are but pawns in the hands of Victor Von Doom," hinting that maybe it's not meant to be Actual Chess at all. This is followed by yet another use of Roy Thomas's index cards, with a link to Fantastic Four #57-60) - since writing the previous blog I've read an interview with Roy Thomas where he claims to have no memory of these cards, and to find them unlikely. Reading through this batch of comics with their sudden increase in references and footnotes, it does look to me as if some sort of record keeping system had recently come into play, so perhaps Roy just forgot about them?

Doom returns to watching his viewscreen, where he's horrified to see that the Silver Surfer has decided not to kill the FF after all. This leads to a recap of both the previous issue of this story AND the events in Giant-Size Super-Villain Team-Up #1, which ends with Doom spotting the Surfer coming back with the Fantastic Four captured. 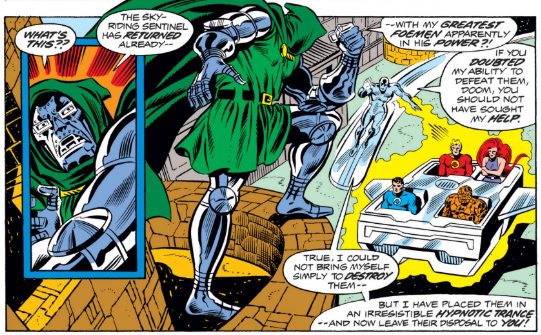 Up until this point Doctor Doom has behaved very much in anti-hero mode, as a schemer who doubts his own actions rather than a power mad dictator, but next he gives the Surfer a lecture where he paraphrases George Orwell's description of the future as "a boot stamping on a human face — forever", twisting it to refer to a desired outcome for his own quest for power. 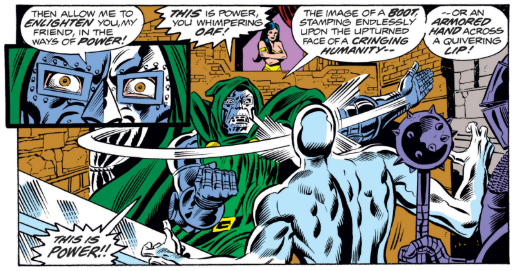 The Surfer totally loses his temper, ripping apart a suit of armour which Doom then uses his own powers to rebuild. This apparently demonstrates that they're equally matched so don't need to have a proper fight, which is a bit of a shame if you ask me. Instead of having a punch-up Doom shows the Surfer where he is keeping the Fantastic Four, with each of them trapped in a prison specifically designed for their own powers. This makes the Surfer wonder what on earth can have happened to Doom to make him behave this way, and Doom reveals that it is, basically, envy. 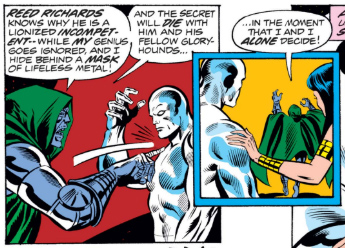 This is another lurch back to Doom being a damaged, almost relatable figure, away once more from the power-crazed dictator. He and The Silver Surfer have very much been the stars of the comic so far - we're over halfway through the issue and the Fantastic Four themselves haven't really done anything - and that feeling continues as Doom instructs a lackey called "Daedalus" to take the Surfer to a chair in another room. Doom, once again watching from a view screen, finds this hilarious for reasons which will become clear later. 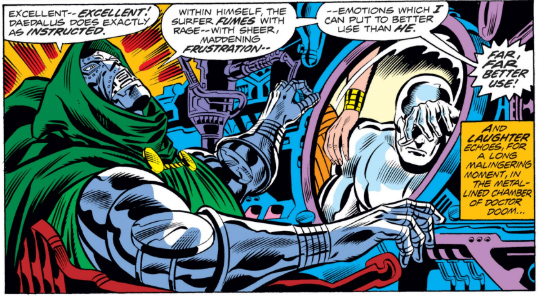 At this point we finally focus on The Fantastic Four who, as before, behave much more like The Fantastic Three with Medusa being mostly ignored. They quickly notice the flaw in Doom's prison - that if they work together they can free each other seperately - and The Fantastic Three free each other while Medusa... just takes off the helmet holding her hair in. They advance through an army of Doom's "death dealing humanoids" (with Medusa completely disappearing from most of the action - why did they bother including her in the team if they weren't going to use her?) before finally reaching Doom himself who turns out to be ... a robot.

Well exactly - it must be getting repetitive for them by now. The story ends with Doom laughing away to himself as he watches the Surfer sitting in his special chair which, it turns out, is being used to drain his power in order to charge up yet another of Doom's creatures. We'll find out more about it in the next story which is called, in the ongoing chess narrative, "Checkmate!"