"The Official Handbook Of The Marvel Universe" was an alphabetical list of all the major heroes and villains of the Marvel Universe, with lengthy descriptions of their history and abilities accompanied by loads of new artwork. It reads very much like a role-playing game manual, with specifics about everything from the battery life of Doom's rocket pack (3.6 years) to his height and weight. According to this, he is 6'2" and weights 225 pounds, which gives him a BMI of 28.8, putting him at the high end of overweight bordering on obese. I wouldn't want to be the GP who has to suggest he cuts down on the Latverian chocolates!

Initially I wasn't sure whether this issue should really be included in my corpus. It's meant to only include narrative texts, so things like the Doctor Doom costumes from Ben Cooper or the Slurpee Mugs don't feature in the final analysis. However, reading through Doom's entry here it's clear that there's definitely some narrative storytelling going rather than simply being a summing of things that were already known. For instance, alongside all the "data" about how his armour works (nuclear reactors and "micro-computers" apparently) we get all sorts of new history, like the former name of Doomstadt (Haasendstadt), the name of Castle Doom's original owner (Count Sabbat), and even some more detail about what went wrong in the accident that scarred his face. It was all to do with "an error in the execution of a fourth-order tensor calculation", which Reed Richards spotted but Doom "dismissed". I've just looked up what that means and am still none the wiser! 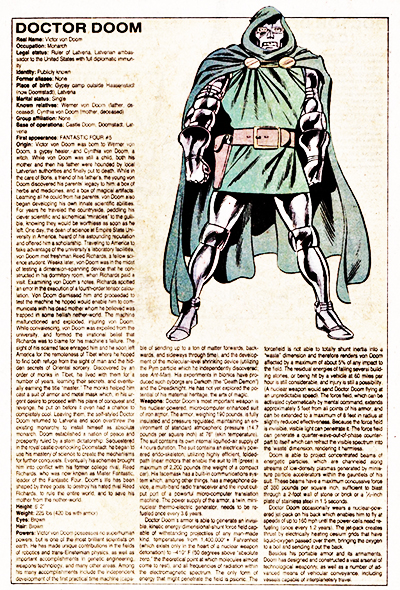 Ordinarily, when reading this sort of thing, I'd just assume that this was information that had previously been reported in the comics stories which I hadn't read or had forgotten. However, one of the great delights of this whole project is that I know for a fact that I have definitely read every single appearance of Doctor Doom, multiple times, and have written extensive notes in the form of this very blog, so I can say with some confidence that huge swathes of this information has just been made up for this isue!

Now, obviously, one could legitimately say that all of the information about Doctor Doom in every text has just been made up, but the storyworld of the Marvel Universe is one which has come to value consistency and even uses citation as a major part of its world-building. Whenever somebody refers to a past event there's almost always a footnote at the bottom of the panel which tells you which back-issue the event can be found in, and the whole tone of this "handbook" is of a definitive record of precisely what has occurred and how things work. I've already says that it resembles an RPG rulebook, but it also functions as a Grand Argument Decider - if two fans disagree about, for instance, how powerful Doom's gauntlet-based rock-projector weapons are, this mighty tome will settle it once and for all. They "have a maximum concussive force of 350 pounds per square inch, sufficient to blast through a 2-foot wall of stone or brick or a half-inch plate of stainless steel in 1.5 seconds." Good to know!

Doom gets two pages in this issue, denoting his status as a major player in the Marvel Universe, with the second page dedicated to a history of his "huge 110 room castle built in the 16th Century" (and as we know, rebuilt on a number of occasions since). This includes an aerial view of the castle which takes a slightly revised version of Jack Kirby's version from Fantastic Four #84 and creates an answer to the traditional Baxter Building cutaway, showing exactly what goes on where. 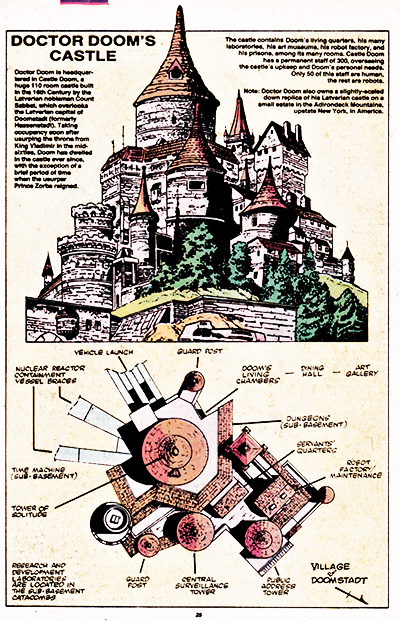 This has clearly been done with some care, trying to match the diagram's layout to Kirby's original, and the fact that the image on the previous page was drawn by Byrne leads me to assume this is another of his very careful attempts to re-map historical continuity. It's a lovely job, I wonder if anybody ever actually used it?

In fact, I wonder if this was ever used as an actual "official handbook" within Marvel itself, with writers asked to refer to it for future continuity references? It doesn't seem particularly likely, but I guess we'll find out as we carry on through the sample. We'll be back in Latveria with John Byrne in a couple of weeks, which should be a good place to assess this, but before then we have yet more cameos and flashbacks to get through, starting next time with the landmark 100th (and final) issue of "Marvel Two-In-One"!