I remember feeling distinctly unfavourable to this series when it first came out, as it was promoted as being by John Byrne and had his art on the cover, but inside it turns out that he only writes it. I didn't buy John Byrne comics for the writing, I thought, what was the point without his amazing artwork?

Reading this comic several decades later I think my younger self might have been a bit harsh - Ron Frenz inked by Joe Sinnot is perfectly acceptable, if a little stiff, and the writing's pretty much the same as in the main FF series - but this is definitely a bit of an underwhelming story to have for the first issue of a new superhero series. It sees Ben Grimm returning to his old stomping ground on Yancy Street where, in order to stop a young boy going into a life of crime, he gives him a recap of his own history, including the tragic demise of his big brother and childhood hero Dan Grimm in a knife fight. 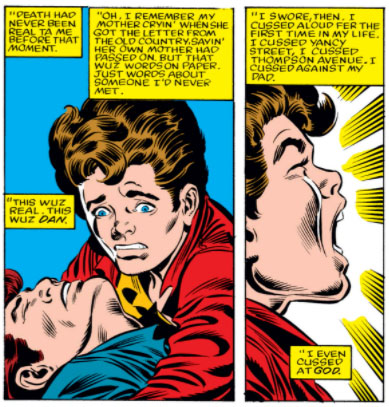 The story then moves on to a re-telling of the Fantastic Four's origin, as seems to be compulsory in first issues, including an incredibly brief glimpse of a young Victor von Doom during Ben and Reed's college days. 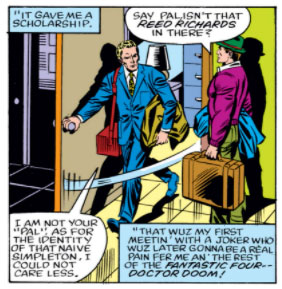 That's your lot for Doctor Doom, and the issue continues with Ben making his pitch to the youngster. However, in a marked change to the usual run of these things, after all that Ben's story does not turn the kid around in any way whatsoever!

It all ends with The Thing shrugging his shoulders and going down the pub for a few beers with an old pal. While I really like this as a twist on the usual morality tales, it does make for a very downbeat, not exactly thrilling debut for what is, after all, meant to be a superhero series!

There's not much of Doom next time either I'm afraid, but we do get to see a prime example of a Marvel series existing almost entirely as a storytelling bridge, rather than a standalone issue. See you then!