After John Byrne's power grab of the last issue, where he did his very best to envelop every Doom appearance of the past few years into his own narrative, this time it's sort of back to normal. I say "sort of" because Mr Fantastic doesn't appear at all, and also because a large portion of the story is the rest of the FF going about their domestic business. Johnny is sitting around in his new apartment, Ben is catching a taxi back from the airport, and Sue spends the first several pages of the comic looking at a new house. 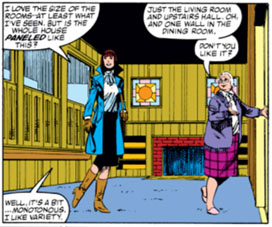 It's all so nicely done that you almost forget that this is supposed to be a superhero comic, but things eventually get going when Terrax, now back to calling himself Tyros after being re-imbued with the power cosmic by Doctor Doom last time (I've read so many comics where trhe characters give recaps of previous issues that I seem to be doing it myself now!), attacks Ben and a proper Big Fight breaks out.

While Johnny heads over to help Sue is picked up by a floating ship hidden in the clouds - an old trick of Doctor Dooms we last saw back in the much-adapted Fantastic Four #17. However, when Doom appears Sue quickly works out that he's a robot. 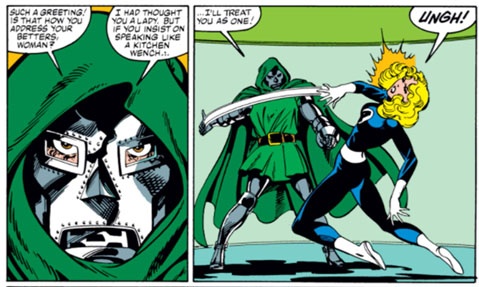 Doom would happily kill a woman, she reasons, but not hit one, and so she's happy to blast the robot's head off with a force field. This leads Doom himself to show up, using a floating display screen that rather charmingly recalls the cover to his very first appearance. 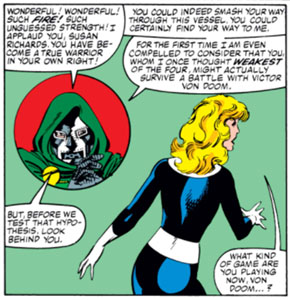 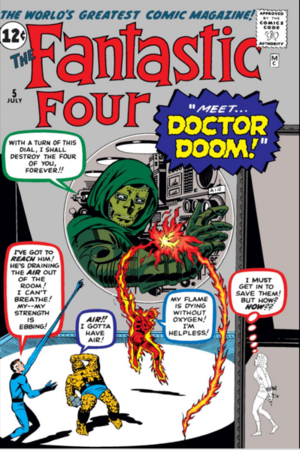 Doom talks about how much Sue has come on as "a true warrior in your own right", echoing John Byrne's expressed determination to make her more than just a feeble female who gets kidnapped all the time. He then opens the side of his floating ship to show her the scene below, where Tyros is beating up both Ben and Johnny. He then finally shows up in person and offers her the choice, to fight him there and then or go to help her friends - "remembering always that to do so is to flee Doom, to acknowledge him your master."

I hate to disagree with The Master Of Menace, but I don't think that's an entirely accurate appraisal of the situation, and even the narration acknowledgea that "his logic is flawed , warped by his unequaled ego". Still, Sue obviously has no choice and so leaps into battle - and there the episode ends, bar a final page where we see the Silver Surfer spotting a "matter transference beam" and zooming down to Earth to investigate. 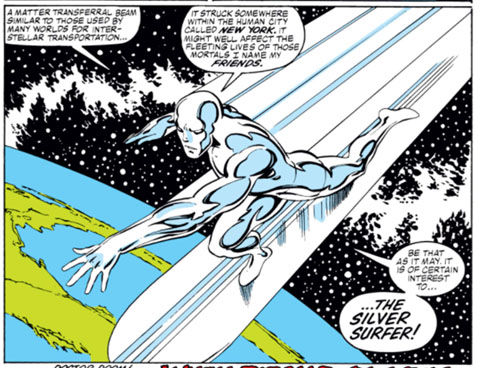 And that's the lot for this one - I must say it's a relief to have a story so light on continutiy after the mammoth task of last time, but there's more deep (very deep!) continuity to come in the next one!