Tempest Without, Crisis Within!

All right then, we've put it off long enough, so now it's time to get properly stuck into some more of "Marvel Superheroes Secret Wars". It's a series which I read when it first came out and thought was utterly rubbish, but has time changed my mind? Is it in fact a misunderstood work, possibly playing with tropes of the superhero genre and bringing them to a wider audience via early stirrings of the kind of transmedia expertise that would make Marvel a global cultural player?

No. It's utterly rubbish.

It's a shame it's so crappy because it does feature a lot of Doctor Doom, especially later on in the series, but in this issue he doesn't even turn up until halfway through. Before then there's a lengthy section with Magneto and The Wasp stuck inside the latter's fortress. The Wasp has been captured for... um... some reason or other, but Magneto can't release her because the weather outside is horrid and they don't have brollies on Battleworld, so he suggests they have a chat, which very quickly leads to him leaping on her for a snog, and her deciding to say "sod it" and go along with it. 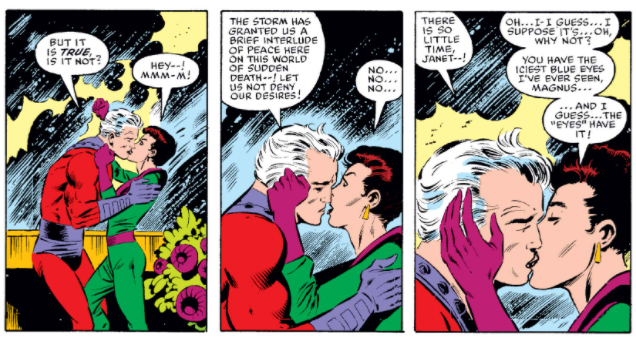 The whole thing reads like it was written by a 13 year old who has never kissed anybody but has definitely seen it a lot in movies, which I guess is pretty much the target audience for the series. That doesn't make it any less awful though!

The weather's also horrible for the Avengers and Fanastic Four over in their own base, and there's a couple of pages of them talking about it. Thor does get to go out and smash up a boulder that was threatening to hit them, but the whole thing feels like its making up time. We're only three issues into the series, and we've already got about a third of the comic filled with people looking out of the windows talking about the weather! 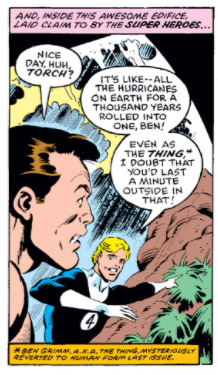 Spider-man is as bored with all of this as I am, so goes out for an explore. On his travels he overhears the X-Men talking to each other in a terrifyingly stiff version of Chris Claremont dialogue where everybody speaks either as if every single word is a portentious quote from the Bible, or they're being transcribed by a music journalist from the 1990s who thinks it's funny to mock regional accents. 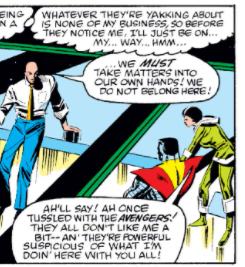 Professor X detects Spider-man's presence and then there's a Big Fight where the X-Men are absolutely desperate to stop him getting away, although why this is I have no idea. Spidey rushes off to find Mr Fantastic to tell him something incredibly important, but then Professor X wipes his mind before he can tell anybody... what exactly? As far as I can tell he didn't hear anything even vaguely controversial, so the whole thing is massively stupid - well done, teenage me, you were if anything too polite about how terrible this stinker of a comic is!

Doctor Doom finally turns up on - of course - a viewing screen, where he's just offered Magento an alliance but been turned down. We then see Doom in his own base making plans for "Victory". He's found some alien machinery which he's managed to get working, and is using it to create two new super-villains: Titania and Volcana. 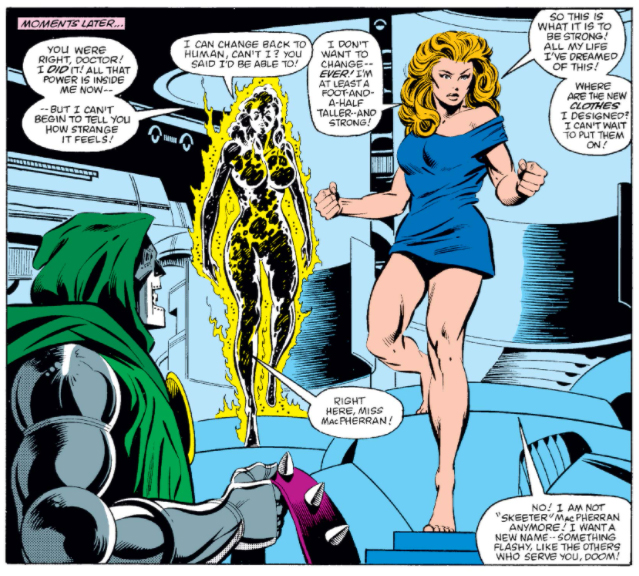 Doom takes them to meet the rest of his gang where, once again, he introduces everybody to each other, conveniently lined up in order.

Jim Shooter immediately gets down to some more romance, introducing Titania (who is "like a Titan") to Absorbing Man and Volcana (who is like a Volcano) to Molecule Man. Titania and Absorbing Man start off their relationship by nearly having a fight, while Volcana and Molecule Man stand at the window talking about Therapy, sensitivity, and how cool Doctor Doom is. 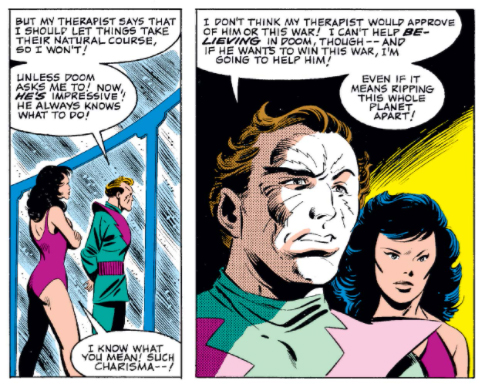 Back at the superheroes' base Thor goes to chat to Enchantress, who suggests they pop to another dimension for their talk. Is that allowed? I thought they were all trapped on Battleworld? However, before we can find out how that works, the rain finally ends just in time for Doom and the baddies to launch an attack. They ram into the base with their ship and then follow Doom's cunning plan: to mess stuff up. 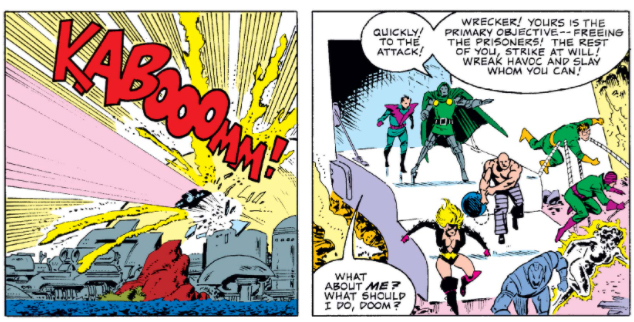 They're there to rescue the supervillains who were captured last time around, and they manage this quite successfully by catching the superheroes off guard. There are a couple of skirmishes and then all of a sudden that's that, with Doctor Doom and Molecule Man summing the battle up almost as if they were two young boys playing with action figures or a role-playing game. 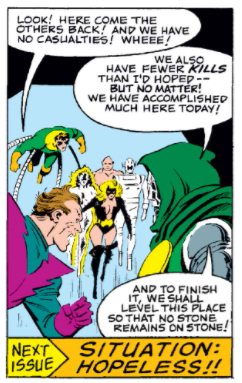 Secret Wars action figures and Role Playing games were very much available! And with that, thankfully, we're at the end of this issue, but don't worry, there's plenty more of this sort of thing to come next time!