The Battle Of Four Armies!

The big cliffhanger last time was Galactus twitching a bit, but this time we find out what was really going on - he was summoning his spaceship to Battleworld! 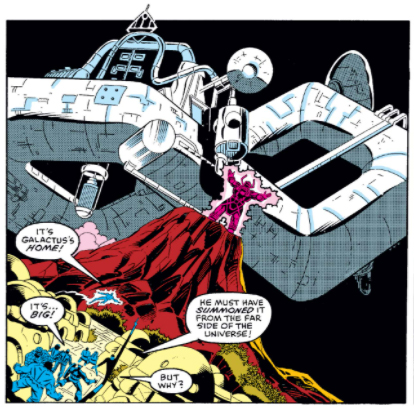 OK, that is a bit more dramatic than I thought! This spooks everybody, especially the alien healer girl who Johnny Storm has latched himself onto. He tries to comfort her, but she drags him off to "her place" which he interprets as her wanting to shag him, basically. She gets a bottle out, which he of course assumes is her fixing them a pre-shag drinky, but when it turns out to be some sort of bong he is cool with that too.

Shooter seems to have decided that Johnny Storm's entire character boils down to "an absolute dick" and, to be fair to him, he does carry this on consistently throughout the series. Sadly for Johnny's libido this isn't foreplay, but rather a drug which allows them to share minds (man) and, happily for new readers, it enables her to get a clearly labelled guide to the major characters in the story. 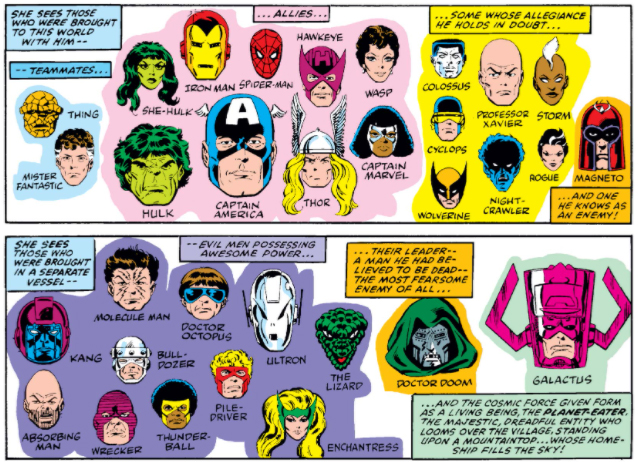 There's also a recap of the story so far, after which Johny and the girl - who introduces herself as "Zsaji" - finally get down to some snogging. Jim Shooter really likes the idea of getting some "romance" into the series, and this carries on in an even more icky style as we find Colossus thinking about Kitty Pryde, his under-age girlfriend back home who he had "big plans" for "a few years from now, when you are old enough." 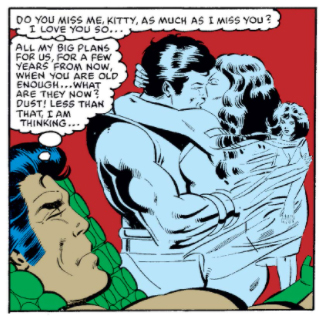 Before that can get any worse he is called to meet Magneto and Professor X so they can look at Galactus's big ship, and then we nip over to the villains to see their reaction to it. Then, at last, we go inside the Doombase to find Doom sitting inside what looks very like his old command centre back home. 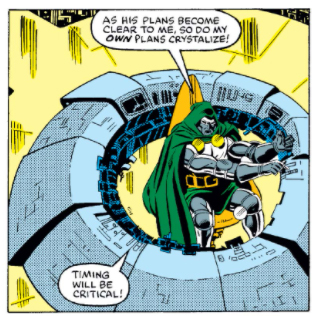 The Enchantress turns up and offers Doom an alliance, promising to fix his face with magic if he agrees. Doom is tempted, but realises that this will come at a price, so refuses. 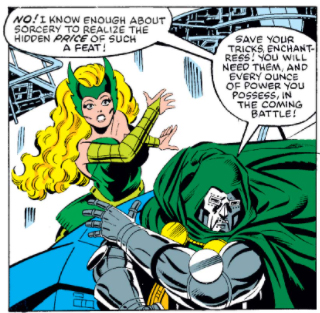 She doesn't take this well, and teleports off in a huff, calling Doom a "madman" as she departs. Doom is often called this, despite the fact that he generally acts very sensibly (if you take into account the fact that he thinks he knows better than anyone else and wants to rule the world), and here it leads him into a thoughtful moment. 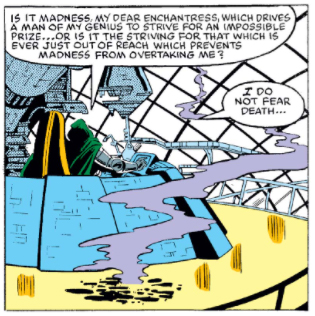 All right, I said he wasn't mad, but that doesn't make any sense at all!

We then switch back to the superheroes, who are trying and failing to get Galactus' attention. Eventually Magneto and Professor X manage to do so by redirecting the former's "latent mental powers" (eh?), causing Galactus to send down a futuristic robot to stop everyone bothering him. 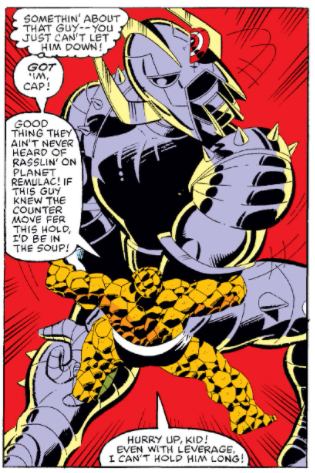 I say "futuristic" of course, because it looks like it comes from the 1990s! They manage to defeat the robot, but there's no time to catch their breath as Doom sends in his army for yet another big fight which, as ever, he is watching from afar via video link. 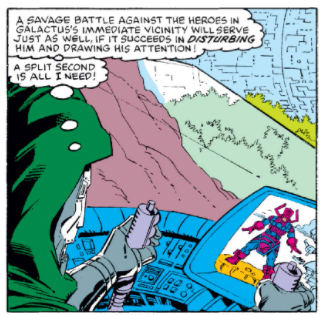 The X-Men turn up and join in, leading to a Big Fight so Big that even Galactus has to notice, and Doom uses that distraction to fly into his spaceship at "tachyon speed", whatever that means. 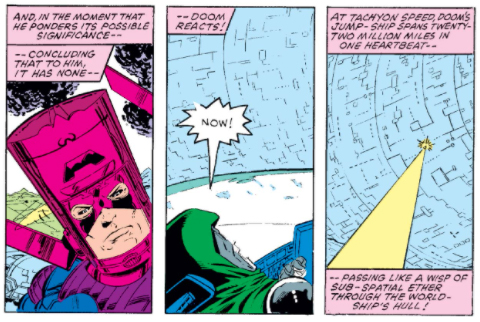 Colossus gets captured by the villians and so Cyclops zaps them with his eye blasts. They retreat, but Professor X orders the X-men back to the ship before they can collect Colossus. As far as I can tell there is absolutely no need for this at all, except to generate conflict within the team and for Colossus to end up with the main body of superheroes in the alien village, where he can be healed by Zsaji, to whom he is immediately attracted. 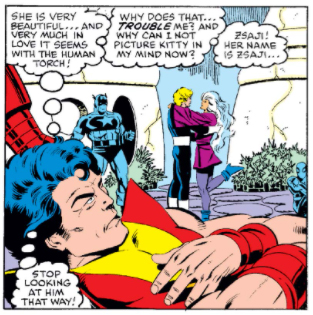 The issue finally comes go a halt with Doctor Doom inside Galactus' ship, where he wanders about monologuing to himself about how big it is, but how he will find an "answer" somewhere thsat will enable him to beat Galactus and then The Beyonder. It's a plan that (SPOILERS!) he will get quite far with, but that's all for another time. For now we are left with another low-key cliffhanger, very similar to the last time, as Doom... sees something! 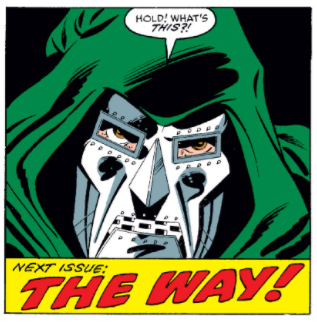 Whatever could it be? I have absolutely no idea, but hopefully we'll find out next time!