Just as "Secret Wars" is finally getting exciting, we must tear ourselves away for another issue of "Beauty and The Beast" which, as with the first issue, promises much with its Bill Sienkewitz cover, and rather fails to deliver with the actual contents.

Doctor Doom appears on a single page, not really conneced to the rest of the issue, so let's get that out of the way first of all. We find him standing in one of his favourite spots - the battlements - surveying his kingdom for... sheep?

Perhaps he's having trouble getting to sleep? Also, what is this about the "village" of Latveria? It seems an odd way to describe it, especially as Doom himself refers to it as a "kingdom" in the second panel. He then gets a message from another bow-tied lackey, which informs him that his alleged son has been seen around Hollywood with Dazzler. Doom does not want to know! 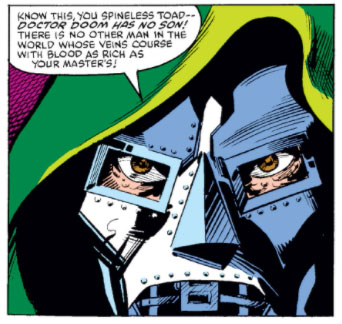 And that's all we see of him this time around - it must be building up to a full appearance at some point, but by the end of this issue we're already halfway through the series with no sign of anything happening Doom-wise!

The rest of the story is, to be honest, an extremely dreary tale in which Dazzler and The Beast mope around in a hotel called - genuinely - "The Heartbreak Hotel". At one point Dazzler admires The Beast's fur for so long that they don't even notice it's raining, which I think is meant to be romantic but mostly comes across as intensely dopey. They are so dopey, in fact, that when one of the other resident gives them a personalised performance of street theatre they don't seem to mind at all, and then they go into a greenhouse for some smooching.

Urgh! Kissing! Eventually a baddie turns up to collect Dazzler, and after a brief fight she agrees to go back to the theatre to give a performance, which ends up being in some sort of weird gladiatorial nightclub. Dazzler's disco dancing does not go down well. 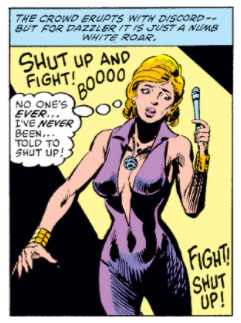 Any sympathy I may have had for Dazzler goes right out of the window at this point - never been booed off stage? She hasn't lived! Having said that, what happens next is outside of even my experience of Terrible Gigs, as the promoter suggests that she should therefore give the audience what they want, and fight somebody. This goes down much better!

A huge fight breaks out, which the audience love even more. Someone ends up being killed, but when Dazzler protests backstage she's told that this is fine, and all part of the "sport". She's not sure, until one of the mutant gladiators - they're all mutants, by the way - slips a mickey finn in her drink.

That does the trick, so when Beast tries to get her to leave she refuses to go, scared that her "glow" (which has come back) will mark her out as a freak in the wider world. Disgusted, Beast goes back to the hotel, where we get the image that we have been waiting for all issue:

Yes, the hotel is called "Heartbreak Hotel", and his heart is broken - IRONY! If only they'd stayed at "Get Rich Forever B&B" the whole story could have had a happier ending!

And that's the end of this weirdly terrible comic. There's lots more of this nonsense to come, but for now we can be relieved that we're heading back for the suddenly High Quality and Sensibly Plotted "Secret Wars" for next time!