Today we're looking at an issue of the X-Men for the first time in what feels like AGES, and it's quite a shock to the system after some of the ploddingly dull/incomprehensible stuff we've had lately. The main story is fairly throwaway,but it's surrounded by some Peak Claremont sub-plotting with loads going on that seems mildly pointless if you've not been reading the series for years, but is clearly vital to the ongoing epic, and it's all told with Claremont's distinctive, weirdly stilted, theatrical language.

The main storyline is all about Colossus and Kitty Pryde being kidnapped by Arcade to protect him from Doctor Doom, but it takes ages to get to that bit, as we have to sit through a lengthy sequence where Colossus has a bad dream about the various women he's let down over the years. I have had quite enough of Colossus lately, to be honest, and this bit goes on forever, eventually ending when he turns into his armoured form. 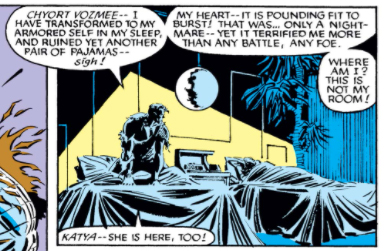 I love the line "and ruined yet another pair of pajamas!" Bozhe Moi!

He wakes up to discover that Arcade has somehow kidnapped him and Kitty from the X-mansion and transported them to Murderworld. It's never explained how he does this, and it falls into the general category "It's An Arcade Story", which means he can do pretty much anything he likes. At least when The Impossible Man does this sort of thing we know he's able to because he's a space alien with cosmic powers, but when it's Arcade it's all a bit confusing. Surely he's just a technical whizz with a sophisticated amusement park?

Anyway, Arcade takes them for breakfast (a very Claremont thing to feature in a comic) but they're attacked by a missile which ruins Colossus' costume - he's not having a good day, clothes-wise. Happily Arcade has a replacement costume in the warehouse where he keeps his Robot X-Men, some of whom are wearing somewhat off-brand versions of their usual clothes. 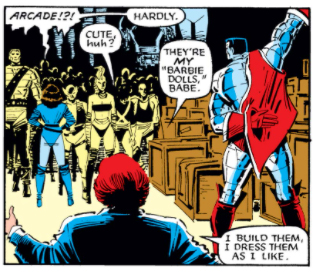 Arcade explains that he's being targetted by Doctor Doom, and needs protection. This doesn't entirely make sense, as he's got a whole army of robot superheroes who, as we'll see later, work just as well as the originals, but at least Doctor Doom works as an enemy. We know from The Fantastic Four that he's annoyed with Arcade about having to destroy one of his Doombots, so it makes sense that this is his attempt at revenge, but then again, isn't he supposed to still be dead at the moment?

Sub-plots keep popping up all over the place while this is going on, with little vignettes showing someone called Nimrod stopping a robbery, Storm fighting some vultures, and Cyclops saying goodbye to his wife before going to work, using dialogue that surely nobody has ever used in real life. 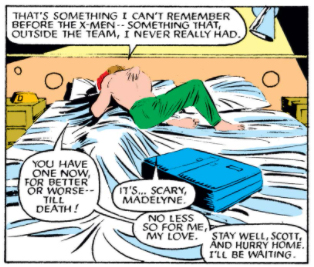 It's all very very Claremont-y, and I'm sure is rewarding to regular readings, but I'm still waiting for Doctor Doom to turn up!

Things start to look up when Kitty, Colossus, and a bunch of robot X-Men travel to a version of 1940s New York because, as we know, you can do anything in Murderworld. They're waiting on a station platfrom when the arriving train turns into a brilliant Doctor Doom Transformer and starts to fight them!

Hoorah! Fighter aircraft launch from some nearby buildings (see above re: anything being possible), the robot X-Men get dispatched fairly easily, but Kitty and Colossus manage to eventually defeat Optimus Doom. This leads to a panel PACKED with Feelings. 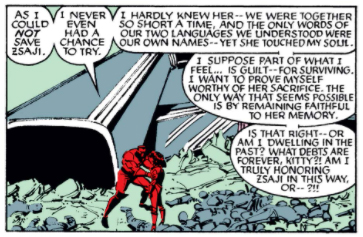 Thankfully Doctor Doom himself finally turns up at this point, blasting the pair of them with lasers before Colossus has a chance to start reading some of his Emotional Poetry. 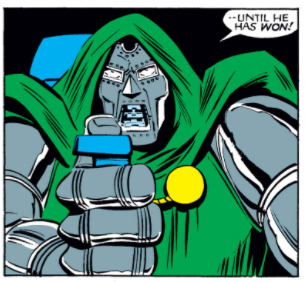 Colossus does a Fastball Special, throwing Kitty after Doom's fighter jet as it attacks Arcade, but when he manages to catch up he finds that he's too late - Doom has captured Arcade and killed Kitty! 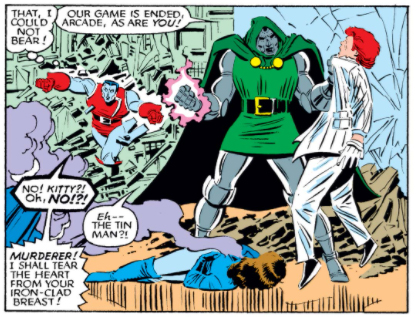 Of course, that's not what happened at all. The Kitty we've been watching for the past several pages was a robot all along, with the real version staying with Arcade. She pops up, phases through Doom's armour and shorts it out. 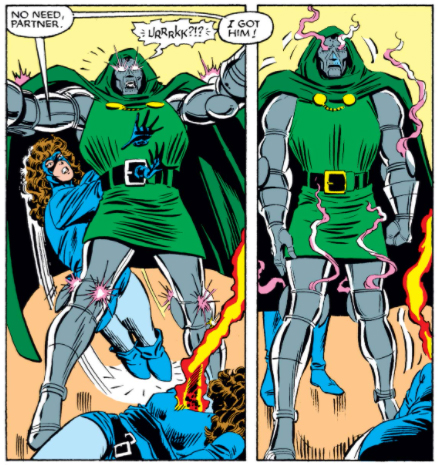 Colossus realises that he's poured out his emotions to a robot, which leads to yet MORE emotions, and then we discover what's really been going on. It wasn't Doom at all, it was Arcade's assistant Miss Locke in a Doom costume!

It turns out that it's Arcade's birthday, and so to celebrate he's given Miss Locke 24 hours to try and kill him, and for some reason she chose to do it in character as Doctor Doom. "That's insane", says Kitty - I would have said "stupid", but the point stands. "Ain't it though!" says Arcade, and that's pretty much it, although he does at least have the good grace to give them a lift home. 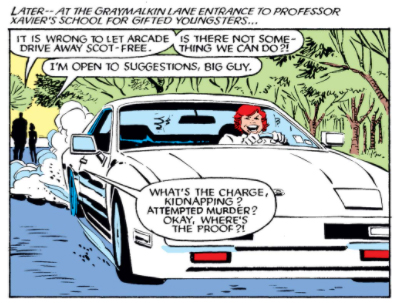 So, to recap, Colossus had a dream then they had an adventure where it wasn't the X-Men, they weren't fighting Doctor Doom, the Kitty who died wasn't Kitty, and the person who caused it all gets away completely scot free. So what was the point of any of it?

Still, it was all very nicely done, with dynamic art from John Romita Jr right at the start of his career, and it was worth it just for the Doom Transformer train really. I've read an awful lot of awful comics lately, and none of them have had anything even remotely as brilliant as that in them!