After Doom's final panel cameo in the last issue of 'Cloak And Dagger', this time he's got a much bigger part to play. It starts with the cover, where we see a very familiar portrayal of Doom looming enormously over other characters, something which he's done repeatedly throughout his career so far.

There's more Doom Tropes on the splash page, where we find Doom standing on a castle balcony, planning to save the world, with Boris The Faithful Retainer in the background. This is great stuff from the writer, Bill Mantlo, who clearly knows his Doom!

I also love the fact that Boris is carrying his lamp again, as he did in many of his earliest appearances, even when they get inside. As they stroll through the castle he and Doom briefly discuss the former's part in the latter's origin before entering a room full of technology which Doom is using to... predict the weather? 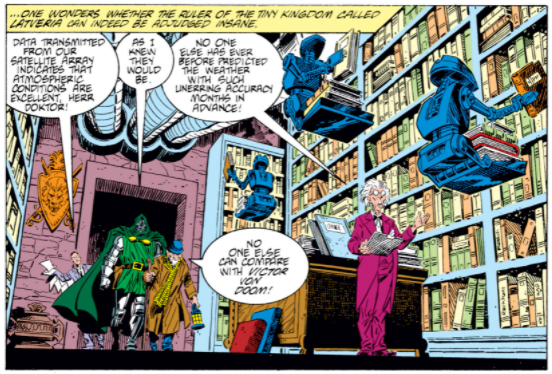 Doom is very good at this, apparently, and I for one would sign up to watch The Weather Forecast if he was doing it! They pass through a room full of art and another room where a fancy meal is laid out - artist Brett Blevins has also been doing some Doom Tropes Research by the looks of it - as they head out onto more battlements and then into another tower where Doom has built a Particle Projector which is going to rid the planet of all nuclear weapons. 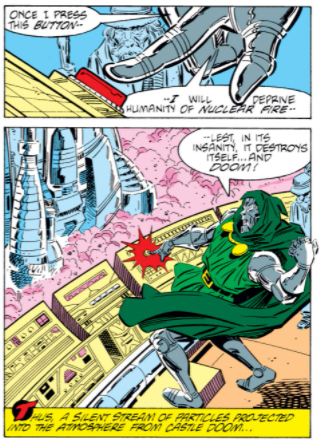 This isn't the first time that Doom has tried to enforce nuclear disarmament - he's also attempted it in the the Spider-man newspaper strip (using a method eerily similar to the one from 'Watchmen') and as part of his takeover of the world in last week's blog. I really like his motivation here though - he's not doing this for the good of the world, not primarily anyway, he's doing it because if the world gets blown up he does too!

Cloak, Dagger, and her Annoying Boyfriend teleport into Latveria just as Doom has activated the device, and meet a bunch of Latverian peasants having a heated debate about whether Doom is a good guy or not. Most of them think he very much is, although I'm not sure how much you can trust the judgement of people who think it's a good idea to stand around in the pouring rain while wearing shorts. 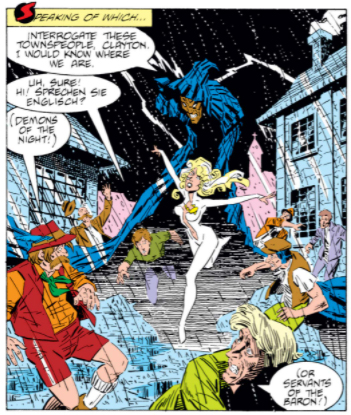 You'd think they'd have adjusted their outfits according to Doom's Weather Forecast really. The police turn up and take Cloak, Dagger, and Annoying Boyfriend to meet Doom. He tears himself away from a KirbyTech Control Panel (more Doom Themes from Blevins) to turn on the charm when he meets Dagger. 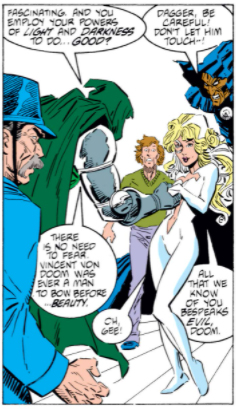 Cloak is suspicious, but Doom then explains that everything they know about him is Fake News, and that he's simply the victim on malicious falsehoods from The Fantastic Four. To back this up he explains his Cunning Plan to them, which involves "neutralising the energy emitted by radioactive materials." This sounds totally plausible to me! 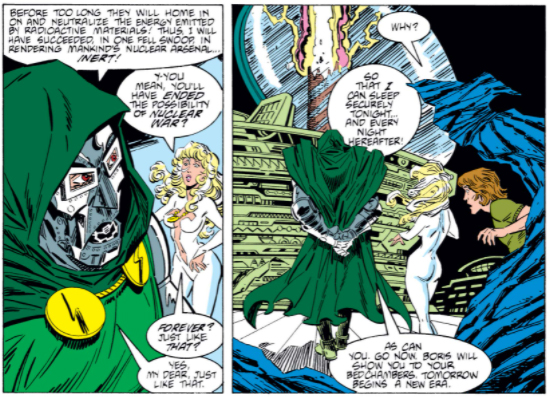 Boris takes them away to a Plush Suite, where Annoying Boyfriend points out that getting rid of radioactive materials means "no energy for cities, no radiation therapy for cancer patients, no nuclear powered science research." The second point is fair enough, even if a Marvel Universe with Doom and Mr Fantastic in it should be able to sort that out some other way, but the first and third points aren't very convincing. Also: no nuclear war!

Annoying Boyfriend sends Cloak And Dagger off to find Doom, who is relaxing at his console, watching a viewing screen, drinking some wine. Really, Blevins and Mantlo, with all of these Doom signifiers you are really spoiling us! 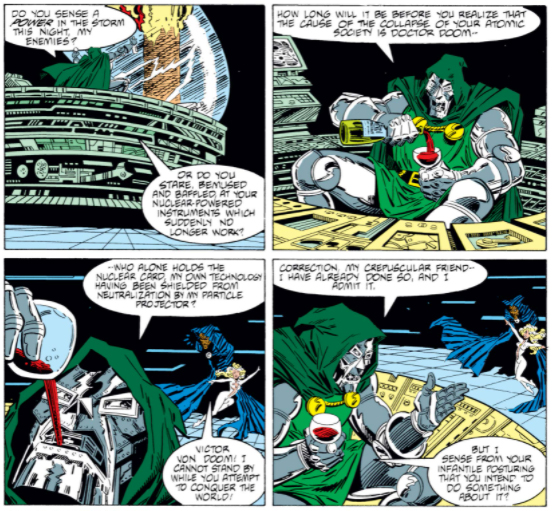 They also answer the question of how Doom drinks through his mask - inelegantly - and give us yet another foretaste of Watchmen. Doom is not a Republic serial villain - he did it thirty-five minutes ago (roughly)!

"We intend to stop you, madman!" says Cloak, which is going a bit far if you ask me, especially as he's already done it. Is it really that mad to get rid of all nuclear weapons? Or have five years of Doctor Doom made me more sympathetic to him than maybe it should?

Dagger zaps Doom with her light and then Cloak swallows him up into his cloak, where Doom has a Mystical Vision of his mum. 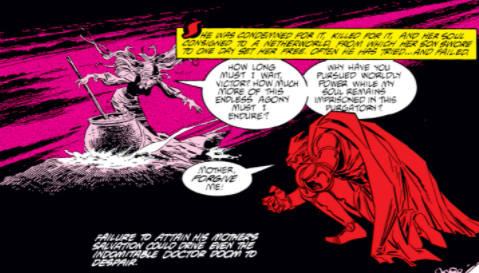 This is definitely NOT a way to get onto Doom's good side and he blasts his way out of the Cloak, which is apparently either rare or impossible. Annoying Boyfriend shows up, and the three heroes teleport away to the Particle Projector. Annoying Boyfriend (who is REALLY annoying by this point) bosses the others around, getting them to try and destroy the device which, just to be clear, is about to remove the threat of nuclear war.

Doom turns up and Cloak comes up with a Cunning Plan all of his own. He traps Doom inside his cloak again, which makes him so absolutely furious that he lashes out with his gauntlets, just as the cloak opens up again so that he accidently blasts his own projector to bits. 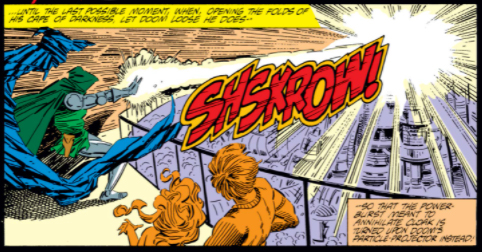 They teleport away and... that's it! We never get to find out how furious Doom must be, we just get The Three Idiots standing on a nearby rock, as Cloak ponders "Will we in time come to regret our gift, as we live with the gnawing guilt that we have given humanity back the means of its own destruction?" This is quite similar to the Moral Issues we looked at last time, where Doom basically saved the world but the Avengers had to stop him because of Reasons, which merrily restored Apartheid and The Cold War. Again, perhaps I've read too much Doctor Doom here, but it does feel as if maybe they could have had a sensible discussion about how it worked, rather than just blasting the whole thing to bits?

Despite all that, this has been a great example of Doom Being Doom, which I wasn't expecting to find at this late stage of the corpus. More please!