By The Soul's Darkest Light

Last week I read a twitter thread by The Claremont Run discussing the way Chris Claremont writes his X-Men characters from "a perspective of perpetual adolescence", with their emotioins raw and judgement hasty. Having since read this comic I can confirm that this analysis is absolutely 100% accurate. The X-Men and other characters act like teenagers throughout, which definitely does make the story more dramatic but, for someone who is very much not any teenager anymore, it also makes them all incredibly, perpetually, annoying.

Before we go any further, the cover image of the X-Men wearing Doom masks to murder the Fantastic Four is a) brilliant but b) entirely unrepresentative of what goes on inside. You might possibly argue that they take Doom's side against the FF, but then again they don't really at all. It's a shame, because it looks great!

What we do get inside is a bit of classic Doom Looming, although for once he's actually there in person, healing Storm, rather than appearing menacingly in the sky. 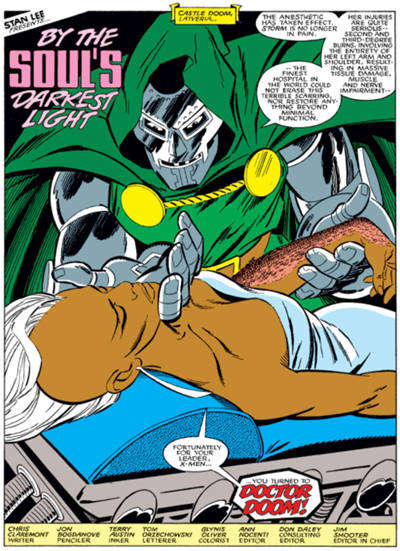 The X-Men have gone to Latveria, where Doom has promised to cure Kitty Pryde of her Turning Into A Ghost complaint. Before that though he's using "bio-enhancer" to heal Storm's burns from last issue. 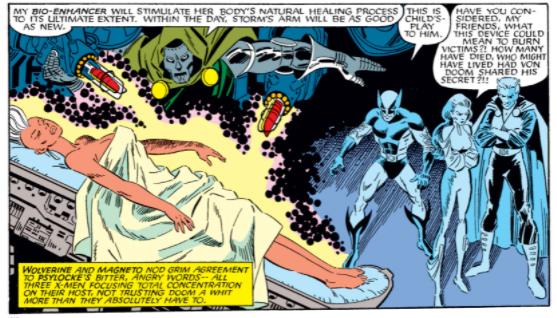 As Psylocke remarks, this could help burn victims everywhere. Um... burn victims like Doom himself, maybe? If, as canon now says (and explicitly clarified in the preceding issue of this series) Doom's injuries were caused by him putting on a burning hot mask, couldn't he use this device on himself?

The other X-Men are hanging around being annoying. Rogue has nipped into town to do some shopping without letting anybody know, so when she comes back (wearing "absolutely aces threads") it trips the alarms, sending a group of exciting armour-based Doombots to catch her.

We've never seen these sort of Doombots before, but they look brilliant - Jon Bogdanov's art throughout this issue is "absolutely aces". The X-Men leap into action and destroy the Doombots, competing with each other to see who can cause most mayhem, which gets them all into trouble when Storm finds out. 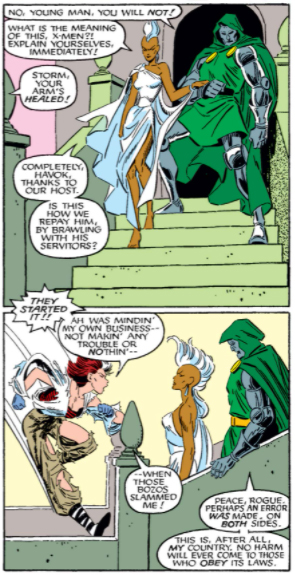 They are extremely teenage here - Rogue even says "They started it!" I bet she was asking if they were nearly there yet all the way to Latveria too.

Doom is very smooth indeed throughout this issue, and indeed the rest of the series, where he's a much bigger presence than in the first half. "Perhaps an error was made. On both sides," he says.

There's more high drama as we cut to Kitty, who's decided that enough is enough and she's going to just let herself die. Drama! She phases out of her life-support system so her atoms can be scattered to the wind, only to be stopped by Franklin Richards in his Astral Form, using his Ill-Defined Powers to talk her down. The X-Men arrive to see him comforting her, and don't seen at all surprised to see him there, leaving asking about it pretty low down on their list of questions.

We then get a lengthy cutaway to the Fantastic Four, all dealing with the idea that Reed might have sent them into space deliberately un-shielded, knowing the cosmic rays would give them special powers. Reed reads Franklin a story, Ben tries to get drunk and saves a child from a handily burning car crash, and Johnny has a moan to Alicia. It all ends with Sue deciding that the journal which "revealed" Reed's secret motivation must have been a forgery because "the author of that diary couldn't have related to Franklin the way you did." The others also come back, having decided that having superpowers is quite cool so they're fine with it. It's a lengthy section full of talking and talking and talking, and it doesn't half go on!

The issue leaves us there, with the FF happy to be reunited and Doctor Doom about to switch on his De-Ghostifying Machine to cure Kitty. There doesn't appear to be an awful lot left to tidy up in the final issue at the moment - the FF are fine, Kitty's about to be cured - but I'm sure Chris Claremont will manage something. Find out if he does, next time!